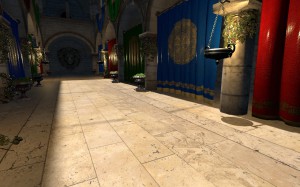 Okay, I’ll state this up front: I’m probably not going to use this approach in my own engine because of many issues inherent with Variance Shadow Mapping. However, I think I did end up with some interesting results to play with, so if VSM with fixed penumbra sizes (or just for filtering) is working well for you, the article may still be useful anyway.
Further worth noting is that most soft shadow articles discuss point lights, so I’ve done things with directional lights. 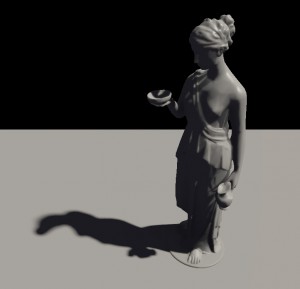 If you need an introduction to Variance Shadow Maps, I recommend Andrew Lauritzen’s classic article in GPU Gems3: Summed-Area Variance Shadow Maps. It also contains a technique for very nice precise soft shadows. So, yeah, VSM uses probability theory to estimate whether or not a point is in shadow. Groovy! Unlike standard shadow mapping, this allows for texture filtering the same way regular texture sampling does (bilinear/anisotropic sampling, mip-mapping, etc), and you can use anti-aliasing while rendering the shadow maps. What’s more, the shadow maps can be pre-filtered with a separable blur. This way we can eliminate jaggies using a small filter kernel, or create very soft shadows (with a fixed penumbra size) using a larger kernel.
Real shadows, however, do not have a fixed size penumbra size; they get “softer” further away from the occluding object. No matter the size of the penumbra, we will need to filter the shadow map to get a blurred version of the original. The two general approaches are:

Either way, you end up pre-filtering the shadow maps, the cost of which is dependent on the amount and resolution of the shadow maps (cubic shadow maps, different cascades for directional lights, etc…); not something I wanted to spend too much frame time on. So instead of pre-filtering, I wanted to try and combine it with “post-filtering” in the lighting shader in a way similar to PCSS but without the crazy amount of samples. However, a standard mip-map chain still needs to be generated.

Calculating soft shadows with shadow maps is not exactly physically correct, but it does result in a visually pleasing approximation: penumbrae get wider with distance. Conceptually, we’ll be using the same method described in NVidia’s Percentage-Closer Soft Shadows paper (so review it ;) ) but of course the implementation will be quite different. As a recap, the steps involved are:

The main building block for our approach, unsurprisingly, uses the Chebyshev’s inequality theorem to find an upper bound for the probability that a sample is in the light. This is the default VSM fare:

This one is exactly the same as for PCSS with an exception for directional lights. If actual directional lights would exist, there would be no penumbra. After all, all light rays are parallel! Also, the traditional PCSS way of back-projecting makes little sense either because the light doesn’t have an actual position in space. To get some handle on it, we’ll settle for a fixed search area instead.

The original PCSS approach tests shadow map samples in the search area to figure out whether they’re occluders. Then, the average depth for the occluders is calculated. Our approach will use Chebyshev’s inequality theory to again get an upper probability bound of occlusion for the entire search area. From this probability, we can calculate the average depth (see [Yang 2010] Variance Soft Shadow Mapping).

is the total average depth,

are the average depths for occluders and non-occluders, respectively.

is the probability of a point being lit (ie: a non-occluder). Then, we can make the following observation:

Since the area search approach is based on the simplification that receiving and casting planes are parallel to the shadow map,

is the reference depth. The only thing left to do is calculate the probability and the average depth for the entire search area. We’ll do this again very coarsely: we’ll use a single sample in a coarser mip level. It’s not exactly precise, but seems to work well enough. The average depth is already right there in the red channel of the shadow map, and for the probability we’ll use the upper bound again. The code below is for illustration, don’t expect any optimizations:

We calculate the penumbra size in the same exact way as in the PCSS. For directional lights, this again doesn’t hold up very well (ah you missing light position!) Instead, we can simply use the distance to the average occluder as a scale factor instead. It’s fun when things get simpler!

// clamp to the maximum softness, which matches the search area
return min(penumbraSize, lightSize);
}

Instead of using a pre-blurred mip-map chain or a SAT table, we’ll perform the filtering on the fly. We’ll start by sampling a fixed number of points in a Poisson disk distribution to get the (approximate) moments of the entire filter region (ie: the penumbra size). We’ll rotate the sample points randomly to reduce banding in favour of noise. This is essentially the same as percentage closer filtering, but using probabilities instead. So, a first draft:

But we can do better, observing that when sampling the disk distribution, we’d get a better approximation if we could get the average over every disk’s area instead of only at the sample point. Again, we can use the mip levels to get an approximation. A Poisson disk distribution has a minimum distance between any two points, so we can use this to calculate the mip level to sample from. Let’s replace some of the shader code:

Not only does this give us a better estimate, it also reduces the noise from the random rotations because samples are expected to differ less. And what’s more, we don’t have to take all that many samples, even for quite large filter sizes! Another way of looking at this approach is as blurring the mip levels in the lighting shader – just enough to remove the jaggies – instead of doing so on the shadow map directly.

As usual with soft shadows, there’s an issue with sampling outside the shadow map boundaries. For this reason, it may be required to extend the shadow maps to accommodate the largest penumbra size (our “lightSize” value). You might also want to keep the light size within certain limits so that most of the shadow map usage isn’t just there to provide the area not on the screen. 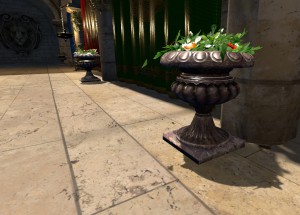 Note the difference between the vase’s shadow and that of the distant flag pole next to it. 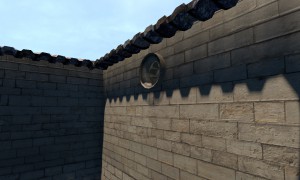 As I’ve said before, chances are slim that I’ll actually use this approach in my own code – unless if it’s for something very specific and manageable. Variance shadow maps have too many issues for me:

But, again, VSMs have been used with success in the past, so who knows this article still may be of use to someone. You might run into other problems too, if you’re up for pursuing this.
And perhaps VSMs could be used only to perform the area search, and PCF sampling for the occlusion tests, which should remove any light leaking problems. Anyway, I’m up to receive any ideas, comments or poisonous arrows!