[edit] To start things off more easily, I decided to limit this post to perspective projections and move on to the generalization (including orthographic projections) in a next blog post.

When doing deferred shading or some post-processing effects, we’ll need the 3D position of the pixel we’re currently shading at some point. Rather than waste memory and bandwidth by storing the position vectors explicitly in a render target, the position can be reconstructed cheaply from the depth buffer alone. This is data we already have at our disposal. The techniques to do so are pretty commonplace, so this article will hardly be a major revelation. So why bother writing it at all? Well…

Since I’m trying to keep it at an entry level, the math will have a slightly step-by-step approach. Sorry if that’s too slow :)

Note: I remember an article by Crytek briefly mentioning similar material, but I can’t seem to find it anymore. If anyone can point me to it, let me know!

So as you already (should) know, the depth buffer contains a range between 0 and 1, representing the depth on the near plane and far plane respectively. A ray goes from the camera through the “screen” into the world, and the depth defines where exactly on the ray that lies. If you’ve never touched the depth buffer before, you might be tempted to simply linearly interpolate between where that ray intersects the near and far planes. However, the depth buffer’s depth values are not necessarily linear (perspective projections), so there goes that idea. 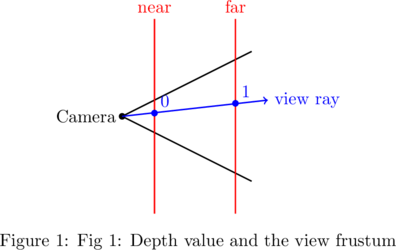 Often, linear depth is stored explicitly in a render target to make this approach possible. Depending on your case, this might be a valuable option. If you expect to sample the depth along with the normals most of the times, you could throw it in there and have all the data in one texture fetch. This is, of course, provided you’re using enough precision in your render target which you might not want to spend on your normals.

So, it’s obvious we’re going to need to convert the depth buffer’s value to a linear depth representation. Instead of converting to another [0, 1]-based range, we’ll calculate the view position’s z value directly instead. As we’ll see later on, we can use this to very cheaply reconstruct the whole position vector. To do so, remember what the depth buffer’s value contains. In the vertex shader, we projected our vertices to homogeneous (clip) coordinates. These are eventually converted to normalized device coordinates (NDC) by the gpu by dividing the whole vector with its w component. The NDC coordinates essentially result in XY coordinates from -1 to 1 which can be mapped to screen coordinates, and a Z coordinate that is used to compare with and store in the depth buffer. It’s this value that we want. In other words, given projection matrix

Writing this out in full for

Here, we assumed a regular projection matrix where the clip planes are parallel to the screen plane. No wonky oblique near planes! This means

is a regular point, hence

If you know you’ll have a perspective projection, you can optimize by entering the values for

is simply the depth buffer value. OpenGL uses the convention that

Depending on your use case, you may want to precalculate this value into a lookup texture rather than performing the calculation for every shader that needs it.

Calculating the position from the z-value for perspective matrices

Now that we have the z coordinate of the position, we basically have everything we need to construct the position. For perspective projections, this is very simple. We know the point is somewhere on the view ray with direction

(in view space, with origin = 0). For now, we assume nothing about

(it’s not necessarily normalized or anything). We solve for

, the only component we know everything about, and substitute.

(Yes, I hear you sighing, this is a simple intersection test.)
With this formula, we can make an optimization by introducing a constraint on

. If we resize D so that

(let’s call this a z-normalization), then things simplify:

for each screen corner and pass it into the vertex shader. The vertex shader in turn can pass it on to the fragment shader as an interpolated value. Since interpolation is linear, we’ll always get a correct view ray with

. This way, the reconstruction happens with a single multiplication! Using a compute shader as with the HBAO example, the interpolation has to be performed manually.

There’s various ways to go about calculating the view vectors for a perspective projection. Since it’s only done once every time the projection properties change it’s not exactly a performance-critical piece of code. I’ll go for what I consider the ‘neatest’ way. Since we use the projection matrix to map from view-space points to homogeneous coordinates and convert those to NDC, we can invert the process to go from NDC to view-space coordinates. The view directions for every quad corner correspond to the edges of the frustum linking near plane corners to far plane corners. These are simply formed by the NDC extents -1.0 and 1.0 (0.0 and 1.0 for z in DirectX), since the frustum in NDC forms the normal cube.

Pass the rays into the vertex shader, either as a constant buffer using vertex IDs or as a vertex attribute and Bob’s your uncle!

If you want to perform your lighting or whatever in world space, you can simply transform the z-normalized view rays to world space and add the camera position. No need to perform matrix calculations in your fragment shader.

There we have it! I think it should be straightforward enough to implement this in a shader. If not, let me know and I shall have to expand on this. Just stop storing your position vectors now, mkay? :)

10 thoughts on “Reconstructing positions from the depth buffer”