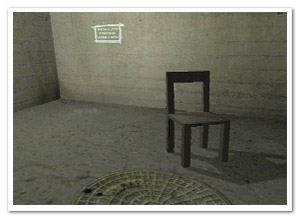 Today, we’re happy to announce the release of Away3D 2.5.0 and 3.5.0. Along with other features and changes, of which you can read more in the official announcement, it contains the new BSP/PVS support! I’ve slaved months on this, so I’m glad it’s finally made public! Keep in mind that we’re always improving it, so it’ll only get better from here :-) So what’re all these abbreviations about?

(Warning: a long-winded post ahead. If you’re not interested in the details, stick to the official announcement!)

BSP is a scene graph that divides a static scene up by splitting it recursively along planes into two half-spaces. If after splitting, the geometry in that subspace is convex, no further subdivisions are needed. In the end, we have a binary tree containing convex meshes at the leaves. What’s the use, you may ask? Well, since all the parts are convex, we don’t need to do any per-triangle sorting. By correctly traversing the tree and rendering the parts in the right order, the sorting is faster AND 100% correct. Specifically for Flash 3D, that means we don’t need to subdivide triangles to try and resolve z-fighting. Furthermore, it also greatly speeds up frustum culling and collision detection. This only works for static scenes however. There are dynamic bsp trees, but they don’t support the biggest speed-up, being the PVS. 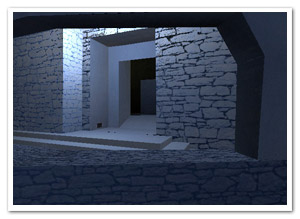 When we have a static BSP, we can use this data to determine which leaf nodes are visible from any given leaf node. This dataset is called the PVS (Potentially Visible Set). It allows us to prevent most of the occluded geometry from being rendered (which, usually, is most of the total geometry). Needless to say, this can lead to huge speed improvements. It’s the same technique games such as Quake, Half-Life, Unreal, … used. However, this speed improvement comes at a price (or what did you think? :) ), which is explained in the “Building” section of this post.

This little bastard was a pain to do. It’s the reason days turned to months of my evenings to get right, and I definitely couldn’t have done it without the help from this thesis: View Space Linking, Solid Node Compression and Binary Space Partitioning for Visibility Determination in 3D Walk-Throughs by Joel Anderson. Also, props to Joa for giving me some optimization tricks and food for thought!

Fabrice did a great job implementing the BSP/PVS builder into Prefab3D, so you can bake your lighting and generate the BSP/PVS as AWData in one programme. When compiling a model with PVS, there’s some guidelines you should keep in mind. No, let’s call them rules instead. Not obeying these could result in the build getting stuck, poor collision detection, or some random unpredictable results.

Finally, there’s a LOT of settings, but you should probably not have to mess too much with them unless you really know what you’re doing. Soon, we’ll have some proper tutorials explaining the nitty-gritty of building (and we might have some other tools to make things easier on you).

Check the video showing a build in action!

Thanks for sticking around for such a long post, but hey, with the amount of work gone into this, I reserve the right to bore you to death with it! ;-)