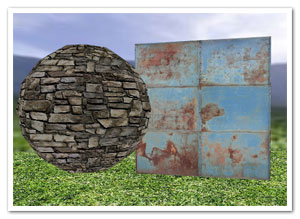 After some books finally arrived by mail, I’ve been spending the past two weeks reading up on 3D maths. Being unhappy with how my playground engine Wick3d was evolving (bad code flow resulting in poor maintainability being the worst of it), I decided to put some of this newly acquired knowledge to practice and redo the engine from scratch. Perhaps the biggest structural improvement would be that the operations such as transformations, culling, drawing, etc… are now being executed from a centralized render pipeline. Furthermore, some other things are done more correctly. For instance, the render target is now a viewport and the camera works with field of view instead of some random zoom factor. The latest addition is a rudimentary clipper, which clips triangles intersecting the projection plane so they don’t just disappear when they’re too close. Regretfully, it doesn’t look too great yet (I have linear texture mapping to thank for that). The shading that was in the previous version hasn’t been reinserted, and it will probably be a while. There’s still plenty of other things that I want to realise before I get back to that.

The code still isn’t available yet, mainly since the code’s not entirely the way I’d like it. In any case, this project is just a study case for me. But who knows what the future might bring ;)

Check the demo if you feel bored, move around the mouse a bit and use the mouse wheel to change the field of view (and notice how fast it starts to look ugly).

3 thoughts on “Wick3d from scratch”