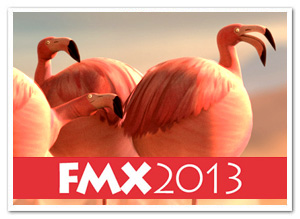 Albeit with trembling knees, I’m very excited to announce I’ll be speaking at FMX this year, ‘Europe’s most renowned conference on digital entertainment’. It’s an intimidating place to be, with many of my heroes either in the organisation or in the speaker list! Luckily I won’t be alone; the session will be part of the Procedural Animation track, where a couple of dear friends are lined up as well. Curated by good ol’ Frank, the track is focused on rendering and animation outside the realms of gaming and film.

I’ll be presenting an adapted version of A Trick of Light that I tried out on Reasons to be Creative, which deals with an introduction to the world of programming shading and lighting without touching too much on the practical programming side of things. So no code but concepts, intuition and of course a wee bit of maths. This session is not meant for the shader programming veteran, but to provide a starting point for anyone interested in introducing some light to their procedural work.

I hope to see you there, conference passes are ridiculously cheap. I know I’ll be gawking at all the other presentations!

While I’m at it, here’s some other updates! I’ve recently joined the motley crew of Psykosoft to work on some upcoming projects. I’m keeping tight-lipped about the details for a while, but maybe some people can already imagine some of the things I’m having fun with.

Alongside that, I’m also working on the Away3D 4.1 beta to implement some optimizations, features and bug fixes. So keep an eye out for that!

As you can guess, busy times!